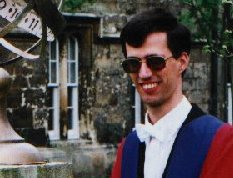 "You are Robin Stevens and I claim my five poundseuros"

I now work for Oxford University Computing Services, and am consequently far too busy to update this web-page properly. One day I will re-write these pages completely, but don't wait up.

For many a long year, I described myself as an nth-year research student in the Department of Astrophysics, Oxford University. My research, which culminated in a thesis, was on searches for high redshift galaxies, under the supervision of Mark Lacy, now driving a convertible in the USA. (If a K-band image of him isn't suitable, or even an optical picture, he also has his own web page).

In my spare time (which, according to various versions of my web page, has been non-existent for about ninety-seven years, but this can't be entirely true), I watch television, listen to a variety of music, associate with some of the usual suspects, read Oxnet, and have a liking for cats and penguins.

I am often accused of being pred(ictable), and sometimes of being a cynic.

Dr Michael Bowler, one of my former college tutors so impressed the students during his third year particle physics lectures that one of them has devoted a web page to his words of wisdom (this is an unofficial mirror of the now-defunct original).